WITH THE COURSE SET, COMPETITORS FROM AROUND THE COUNTRY IN SKIS AND OUTRIGGER CANOES WERE GOING TO BE IN FOR A BUMPY RIDE, TAKING ON THE BEST OF THE BAY…

With challenging conditions, running the new course was going to be testing for race organiser and competitors alike! “I really wanted to give the competitors the opportunity to experience the best of Carbis Bay – after all, these conditions are exactly what we paddle for but, I was worried it might be too much…”. The beauty of Carbis Bay is that when conditions become too hectic out deep running the event within the relative shelter in the Bay of St’Ives is always an option but would it test the best? Clearly flat water would favour the sprinters, with Jonathan Boyton fresh from his fifth place result at the European Sprint Kayak championships this year along with converted ex K4 sprint paddler Adrian Croucher testing themselves against Devonian Ryan ‘Scoob’ Lark and local paddler Jordan Roberts.

“We wanted to test the majority of the field but also wanted to ensure that everyone was safe”. Said event organiser Glenn Eldridge of Ocean Sports Coaching “I feel that it is important that we race in the conditions we relish but, allow those with developing skills to have a positive experience”. With such huge efforts being made by so many paddlers to attend Paddlefest – Hawaiian canoes from Paddle Sports in Milton Keanes, London based OCUK and Royal Canoe club in conjunction with Bournemouth OC1 paddlers along with the South End motlely crew of Willem Prinslow and Richard England amongst the many it is was important to provide a course to remember. With safety in mind two courses were run of equal distance, an exposed ‘outside course’ facing the elements round the ‘Island’ and an ‘inside course’ turning within the shelter of the bay but still picking up bumps. 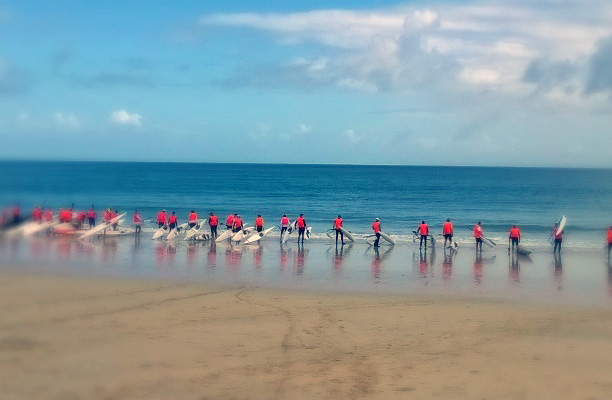 “WATCHING THE PADDLERS BATTLE IT OUT IS ALWAYS A PLEASURE I CHERISH. FOLLOWING IN THE SAFETY BOAT I GET AN AMAZING VIEW OF WHAT IS GOING ON. THESE ARE SOME OF THE SNIPPETS I SAW”.

After some jostling in the early part of the race two lead packs formed early on with ever green Simon Lawrence and 2015 Celtic Crossing competitor Martin Fleet mixing it up in the double with Scoob, Boyton, Jordan Roberts and in form paddler Nick East – closely followed by OC1 paddlers Pete Holliday, Ryan James shadowing Gus England and with Alan Roberts taking an inside line. Plenty of action occurred further back with the OC6 leading the field to the inside marker off the harbour wall. Nearing the ‘Island’ the ocean started to feel the swells with competitors becoming thrown around like toy ducks in a kiddies paddling pool! Boyton after making an early move to the front soon began to feel the ocean effects too, as paddles gradually lowered toward his knees “to be honest I thought that would be it, it didn’t look as though Jonathan was going to cope with the conditions at all”. Rounding the ‘Island’ paddlers were now in the teeth of the swells stringing the field out – despite warnings the field attempted to tuck in close to the headland just as an over head set boomed in round the cliffs! Immediately the lead safety boat moved in and ushered those keen for a tight racing line out into deeper water with Scoob making the best of the conditions. There is a saying in Surf Life Saving:

THERE ARE NO BUDDIES AT THE BUOYS…!

Ex World Junior Surf Ski champion Scoob Lark seemed to have this at the fore of his mind and made his move to turn the outside mark first – by doing so, getting the first choice of bumps. Once round, his lead never looked in doubt.

The next battle came from Boyton and Roberts (jnr) knowing that making the most of the bumps was vital Jordan needed to hold onto that elastic band! Boyton after initially being inhibited by the bigger swells clearly had regained his sea legs and wasn’t going to give either Scoob nor Jordan an easy ride. As the course progressed the elastic stretched a little too much and Roberts was now involved with keeping Nick East, Croucher and OC paddlers Ryan and Pete at bay as Boyton opened up the taps and showed his class.

As the the course progressed the early blistering pace seemed to take its toll and the Pete and Ryan became involved with carbon copy dices – Ryan (who had now marginally moved ahead of Pete) jostling with ski paddler Richard England and Pete similarly with Daniel Clough on the bumps.

Aside from the big guns mixing things up at the front there was plenty of action happening throughout the field either battling with the elements, each other or pushing personal boundaries. Richard Hurlock is the product of the Ocean Sports Academy along with  and Peter Davies – after paddling sit on top kayaks both made the jump onto Bluefin skis last year and have not looked back since – to make it around the course in bumpy conditions was no small achievement by both. Liz Brock took third overall in the Masters category as a female paddler showing many of the men how to do it. A flat water convert based in Exeter, Liz has been gradually improving here ocean skills over the years.

“It was fantastic to watch, there was so much action going on throughout the field but unfortunately I couldn’t identify all of the paddlers” said Glenn. “I was really really pleased to see how Paddlefest continues to attract such a broad range of competitors from around the country year on year and watch how they progress as paddlers – for example last year Greg would have been doing a fair amount of swimming but completed the more exposed ‘outside’ course this time. Plus, the Outrigger field continues to expand almost matching the numbers of ski paddlers at the event”.

Many OC paddlers also made the long trip South to be rewarded with a weekend long break packed full of paddling – unable to make the Coast2Coast (a stunning 52km event where paddlers leave from Penzance rounding Lands End finishing at Carbis Bay) due to a large following swell we instead ran ocean skills clinics on the Sunday for those who stayed behind. As a way of making up for the Coast2Coast a fleet of OC’s aimed for the ‘Stones’ cardinal mark 7km out to sea in what can only be described as jaw dropping in its beauty as well as the surfing skills of Pete and Ryan behind the safety boat at 15kph!

” WE ARE REALLY LOOKING FORWARD TO NEXT YEAR ALREADY, FINGERS CROSSED CONDITIONS WILL ALLOW US TO SEND PADDLERS DOWN TO THE ‘POLES’ WERE 200M PLUS, RIDES ARE POSSIBLE”. UNTIL THEN A MASSIVE THANK YOU TO ALL WHO ATTENDED THE 2016 EDITION OF PADDLEFEST AND WE HOPE YOU ENJOYED OUR NEW OCEAN SPORTS CENTRE. RESULTS AND PIX BELOW.